At Danksgiving, There’s No Need to Go Outside for a Smoke

For a certain kind of Thanksgiving celebration, cannabis — in all its forms — is a key component of the year’s biggest meal.
Before your Danksgiving on Nantucket, make sure to stop by Ack Natural to stock up on flower, edibles, concentrates, vapes and more!

A few things, though, weren’t so typical — three people rolling joints as everyone dined; smoke hanging low in the air over the tables; no alcohol present. In addition to peonies, the flower arrangements featured dried cannabis buds.

Cannabis-infused olive oil and butter were passed around as if they were standard — which, at this dinner, they were. This was Danksgiving, the latest twist in the holiday’s evolution.

The dinner, in early November in Los Angeles, was hosted by Sarah ElSayed, a visiting New Yorker who works in marketing for cannabis companies and has hosted similar events since 2016, when she held her first cannabis-laden Friendsgiving. The tradition has turned into weekly weed-infused dinners at her Brooklyn apartment, and she hosts a special Danksgiving each year.

Devan Welch, a Los Angeles freelance marketer for apparel brands, said he began hosting a Friendsgiving celebration in 2010 that has become more cannabis-friendly over time. “I let guests make the decision to infuse what they would like to eat,” he said, adding, “What’s better than smoking and devouring a massive meal with friends?” 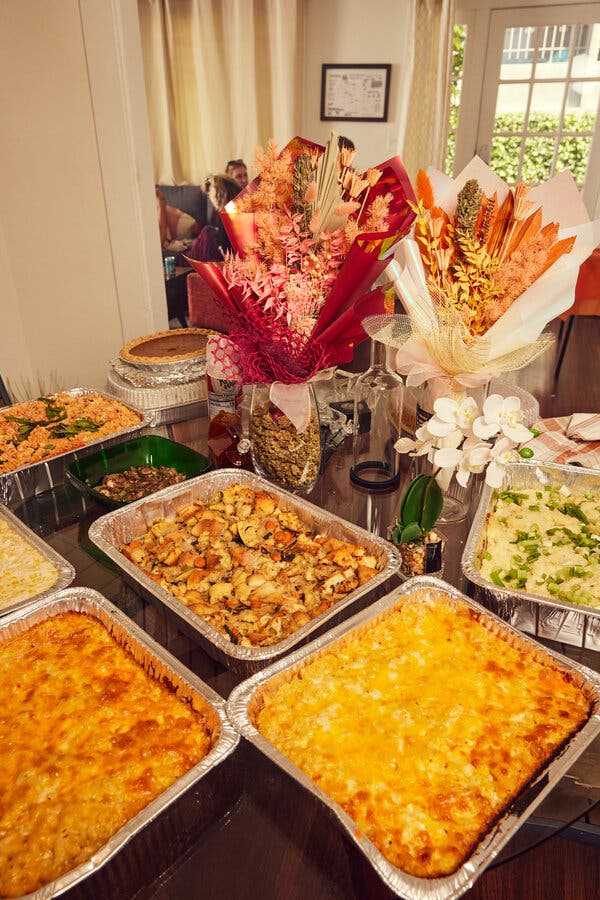 Sarah Jean Meeker, a landscaper and operations manager in Baltimore, began bringing infused — and clearly labeled — desserts to her family’s Thanksgiving gathering in 2015, before expanding to the rest of the meal.

“Sometimes I wouldn’t want to infuse the whole meal, or not everyone would want to consume, so I infused honey and oil or a compound butter on the table for people to use at their will,” she said.

She calls the dinner Danksgiving, though her family has also called it Seshgiving, Tokegiving and Green Friday.

Until fairly recently, Danksgiving wasn’t much more than a funny word that cannabis fans used for smoking weed on Thanksgiving. It’s easy to see how the portmanteau came about: “dank,” a slang term for high-quality weed, fits into the name of a holiday that appeals to the appetite — whether one is high or not.

Steve Bloom, who was the editor of High Times magazine from 1988 to 2007, noted that his 2008 book, “Pot Culture: The A-Z Guide to Stoner Language Life,” doesn’t mention the term — an indication of how recently it has become popular, though he pointed out that a definition appeared on the website Urban Dictionary the same year. (Google searches for the term also typically spike around Thanksgiving.)

“The word just evolved, like so many do in the cannabis lexicon,” Mr. Bloom said. He noted that the High Times Cannabis Cup, a judged competition, used to take place every year in Amsterdam during the week of Thanksgiving. “I’m sure someone used the term then,” he said.

It’s unclear how many Americans hold Danksgiving dinners; the stigma that still surrounds the use of cannabis in many families and places may discourage revelers from sharing their celebrations on social media. But there is evidence that cannabis use is rising around Thanksgiving. In 2018, the National Highway Traffic Safety Administration ran a #DitchDanksgiving social media campaign, warning those who did participate not to drive under the influence.

Just one day before the holiday is another event promoting cannabis consumption: Green Wednesday, the weed shopper’s equivalent of Black Friday. Online sales of marijuana on Green Wednesday last year rose 78 percent over the average for the previous three Wednesdays, according to data provided by Jane Technologies, a company that markets sales technology to more than 2,800 dispensaries in 38 states.

The multistate cannabis company Ayr Wellness hired the market research company Suzy to conduct a “Danksgiving 2022 Shopping Survey” that asked 1,600 Americans about their Thanksgiving weed habits. Some 90 percent of self-identified cannabis consumers surveyed said they planned to stock up for the holiday.

Steven Osuna, an artist in San Diego, said that most members of his family partake in cannabis at Thanksgiving. “For me, it’s the crossover of a communal drug becoming a family side dish that I love,” he said, adding, “I’ve been hearing the word ‘Danksgiving’ long enough that it’s cheesy.”

The legalization of cannabis in state after state, including California and New York, has driven more companies to try to reach consumers at Thanksgiving.

In 2019 and 2022, Kiva, a California company known for its edibles, released a limited edition single-serve packet of powder for making cannabis-infused turkey gravy. Kiva’s pitch: Under the gravy’s effects, “your household will be back in harmony in no time — each remembering that it’s all … truly … gravy.”

But for her Danksgiving celebration, though, Ms. ElSayed did her own cooking and baking.

She started with gingerbread cookies and moved on to savory foods, infusing extra virgin olive oil using what she calls an “old-school method” of heating cannabis flowers in a 230- to 240-degree oven for about a half-hour. The process, known as decarboxylation, or “decarbing,” activates latent cannabinoids, like THC, that are naturally found in the plant. The flowers are then added to butter or oil on a stovetop, where Ms. ElSayed simmered the mixture in a sealed Mason jar for 40 minutes to complete the infusion.

“This method is what all the old cannabis cookbooks use,” she said. Because she lives in New York, where products like this are not legal for sale, she said, “we have to make our own.”

Most of the dishes at Ms. ElSayed’s dinner were not cannabis-infused, but could be if the diner chose (hence the bowls of infused olive oil and butter on the tables).

No alcohol was served. “It wasn’t a stated thing, but most of us aren’t really big drinkers,” Ms. ElSayed said. Many marijuana-centered events avoid alcohol for various reasons, including the belief that the cannabis high is more benign.

Ms. ElSayed’s latest edition of Danksgiving seemed to be a hit. Most guests were in some way tied to the cannabis business; many were content creators, some owned brands and others held more corporate titles in the industry. Coincidentally, the Airbnb rental where the dinner took place turned out to be part of “Bukowski Court” — the East Hollywood property where the writer Charles Bukowski once lived and wrote the novel “Post Office.”

Guests ate, smoked, snapped content for eventual reels, popped dried weed buds off the flower arrangements to smoke and giggled a lot. Nobody was a stranger to social weed smoking, but the novelty of having a normal-seeming Thanksgiving with so much cannabis involved seemed particularly amusing.

“It’s like being at your grandma’s house — and your homie’s house,” said Roger Sterling, a third-generation farmer and influencer who has been growing hemp for four years and recently faced a felony possession charge in Florida. (The charge was later dropped.)

“We don’t even need to take a walk,” he added, referring to another unofficial Thanksgiving tradition many cannabis users know: stepping out for a smoke, away from the eyes of disapproving friends and relatives. At Danksgiving, there’s no need to go anywhere.